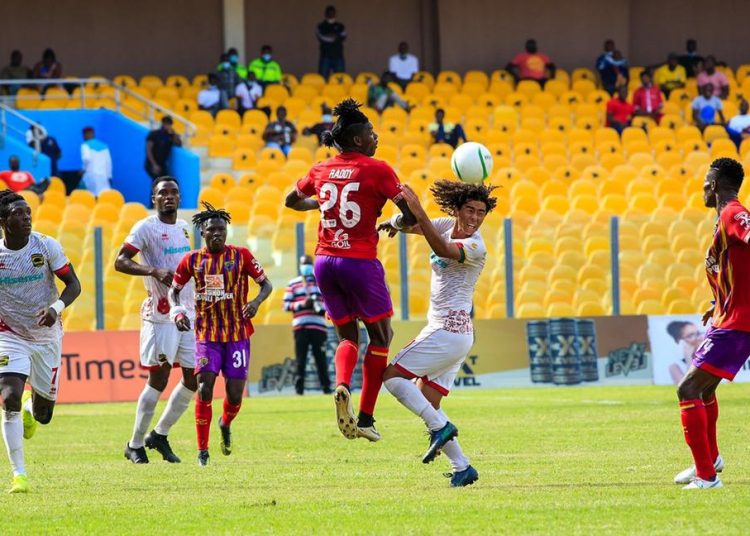 A combination of super goalkeeping and poor finishing made sure the first installment of this season’s Super clash between Accra Hearts of Oak and Asante Kotoko ended goalless at the Accra Sports Stadium.

The home side made their intentions very clear from the start, when some good interplay between Afriyie Barnieh and Gladson Awako, resulted in the latter being through on goal, but his effort was tipped over by Kotoko goalkeeper Ibrahim Danlad.

Hearts continued to dominate possession, and once again went close, this time through Sulley Muntari, whose acrobatic effort from close range went over the bar.

Kotoko’s Cameroonian wonder, Frank Etouga flicked a near post lob that nearly resulted in a goal, but for great goalkeeping from Hearts’ Richard Attah.

The game wasn’t short of some flying tackles and flaring tempers with Hearts duo Salim Adams and Gladson Awako picking up yellow cards in the frantic encounter.

Hearts, once again, fashioned out a glorious chance, when Afriyie Barnieh played Kojo Obeng Jnr through on goal – but somehow, his left footed strike came of the outside of the post and sailed out agonizingly.

Kotoko, who came into the game on the back of six wins from their last eight games, were struggling to get their act together, and had to rely on half chances and long range efforts to trouble the Hearts defense.

However, the league leaders, Kotoko came out of the dugout for the second half with some renewed energy and took control over possession early on.

Prosper Nartey’s side, went inches away from taking the lead, when Richard Lamptey’s close range effort needed a double save from Richard Attah to prevent Kotoko from taking the lead. Hearts made some early changes in the second half, withdrawing Sulley Muntari and Salim Adams, with Isaac Mensah and Ansah Botwe replacing them.

That move seemed to affect Hearts control of midfield, as Kotoko slowly begun to take the momentum. However the offensive efforts of the Porcupine Warriors were thwarted by world class defending from the Phobians, most notable from Mohammed Alhassan and Denis Korsah.

The goalless result will suit Kotoko, who still sit at the top of the league table, and maintain their 12 point gap between themselves and rivals Hearts.