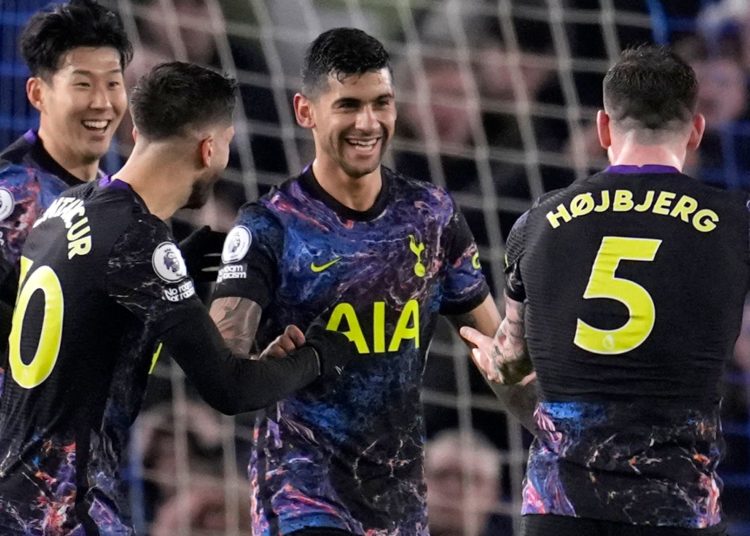 0
SHARES
14
VIEWS
Share on FacebookShare on TwitterShare via Whatsapp

Harry Kane became the Premier League’s highest away goalscorer as Spurs kept their top-four hopes alive with a 2-0 win at Brighton.

The England striker was played through wonderfully by Rodrigo Bentancur just before the hour in a classic counter-attack. He slotted Spurs’ second goal past Robert Sanchez as he broke yet another English top flight record, scoring his 95th goal in just 139 away Premier League games.

It was tinged with controversy though as VAR checked it for offside – although Kane was clearly on – with Brighton feeling aggrieved that they had not been awarded a penalty for handball just before.

However, VAR deemed that Pierre-Emile Hojbjerg was too close to the ball when it hit him to be deemed enough for a penalty.
Tottenham had gone ahead just before half-time in what had been a quiet first half with a few bizarre moments littered throughout. Heung-Min Son laid the ball off for Dejan Kulusevski and his low effort through a packed area deflecting off Cristian Romero and firing past a rooted Sanchez. Despite knowing little about it, the goal was Romero’s first for the club since joining in August.
Source: Sky Sports
Tags: Brighton and Hove AlbionHarry KaneTottenham Hotspurs
Previous Post