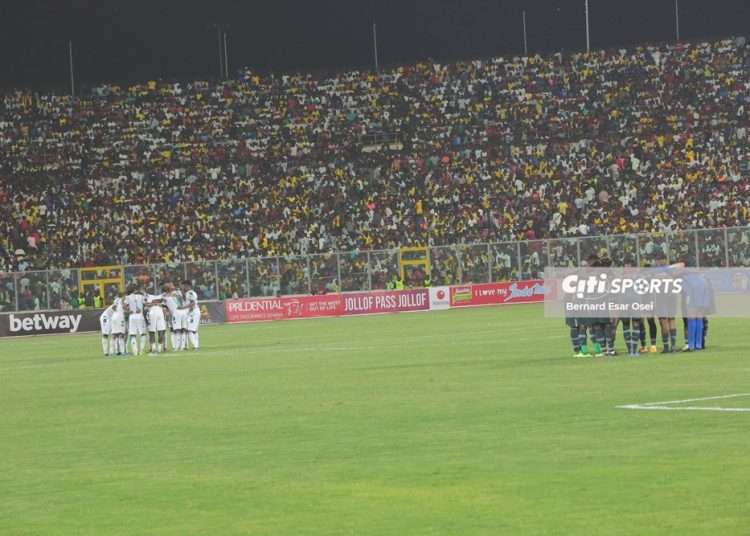 Ghana’s Black Stars were held to a 0-0 draw by Nigeria at the Baba Yara Stadium on Friday.

Despite dominating the game, the Black Stars failed to take their chances and were let down by poor set-play throughout the game.

The two teams will face off again in four days in Abuja, with the winning team on aggregate going through to the World Cup in Qatar.

These decisions seemed to be the right call as the Black Stars started the first half with great intensity, pouring forward in numbers when they had the ball and pressing effectively when they didn’t.

Afena-Gyan fired a shot wide from the angle before almost getting on the end of a long ball which was shepherded back to Nigeria keeper Francis Uzoho.

A Mohammed Kudus ball over the top for Abdul Fatawu Issahaku down the left looked promising but the winger’s touch was heavy and he was tackled by defender, Leon Balogun.

Afena-Gyan then did brilliantly to hold off the two Nigerian centre-backs before laying the ball off to Issahaku whose effort from outside the box was pushed out for a corner.

Nigeria started to get on the ball more and were almost in when Sanusi’s cross just missed Victor Oshimen in the box.

They got their first shot on target in the 40th minute when Oshimen’s weak effort was comfortably held by Joe Wollacott.

Aribo then broke into the Ghana box and found some space but fired his shot wide as the Nigerians ended the first half strongly.

The second half started almost the same way the first did with Ghana surging forward in numbers but a string of early set-pieces was dealt with quite comfortably by the Super Eagles.

Quite muted shouts for a penalty by the Black Stars were waved aside by the referee when Afena-Gyan went down in the box, as the first 10 minutes passed without incident.

Moses Simon was then played through in the 55th minute but his strike was brilliantly saved by the feet of Wollacott.

With Nigeria seemingly taking control of the game, the Black Stars almost took the lead when Thomas Partey had a shot deflected over the bar after a layoff from Jordan Ayew.
The Black Stars regained control of the game and threw more players forward in search of the opener.
Kudus Mohammed went close to breaking the deadlock with a superb run on the right, dancing his way past defenders before his effort was pushed around the post by the keeper.
From the corner, Amartey flicked on the ball to the back post where Afena-Gyan failed to make meaningful contact.
Ghanaian hearts sank in the 76th minute when the referee pointed to the penalty spot after ball struck Iddrisu Baba’s hand in the penalty area.
However, the official reversed his decision after a VAR review, which showed that Baba had been fouled in the build-up, prompting screams of joy and relief from the largely Ghanaian crowd.
Four minutes were added on at the end of the 90 but neither side could find a goal before the referee’s final whistle blew.
ShareTweetSend
Previous Post