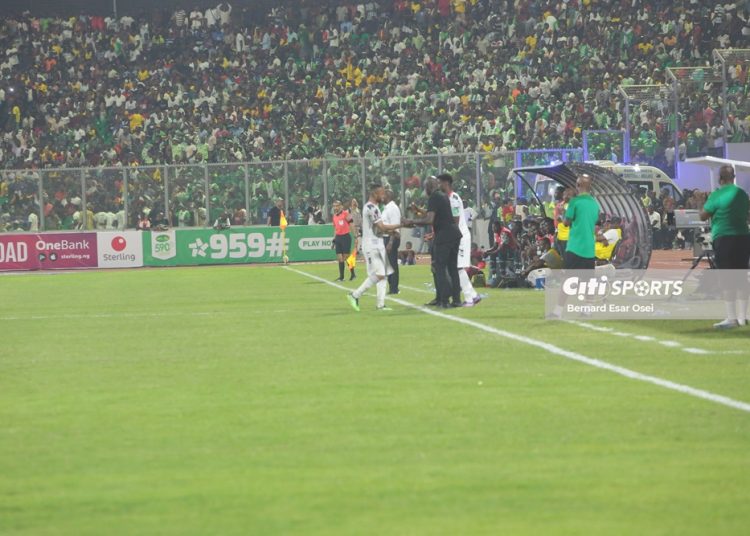 Black Stars striker, Jordan Ayew was booed off the pitch by fans at the Baba Yara Stadium in Ghana’s 0-0 draw with Nigeria on Friday night.

The forward has scored 18 goals for the national team but has not found the net for the Stars in a year, since he scored against Sao Tome and Principe in 2021.

There were some calls for him to be dropped from the squad after an underwhelming AFCON campaign but new head coach, Otto Addo kept faith in the Crystal Palace forward.

Not only did he call him up despite Jordan recently testing positive for COVID-19, the striker started the first leg of the 2022 World Cup Qualifier against Nigeria at the Baba Yara stadium.

Despite a typically energetic start, a visibly tiring Jordan started to give away freekicks in the first half.

However, what irked fans in the stadium more was the fact that Jordan’s set-pieces were extremely poor, wasting good chances and positions the Black Stars could exploit.

This continue well into the second half with fans getting more and more agitated as the game wore on with no goals.

Things came to a head in the 90th minute when Ayew was replaced by Kwasi Okyere Wriedt.

The forward went off to a chorus of boos from the watching crowd at the Baba Yara Stadium, with his brother Andre also looking on.

On social media, the response to Jordan’s performance was not much more positive.

Jordan Ayew wants to do everything, play corner kicks, free kicks, throw balls lmao how can a player be this selfish? 😂😂😂

Ghanaian football fans are so done with Jordan Ayew.

My take from the game:
Don't start Jordan
Keep Afena-Gyan at the top but get players that can help him
We need to work on our set pieces. It's poor
The coach should make use of the subs and it should be timely
Build up from the back should be looked at#BlackStars #GhanaVsNaija

Good football from Ghana. I have hope on this team, they will go to Abuja and finish the job.. but Jordan Ayew should not play pls 🤣

The fans Booing Jordan Ayew? 😂I am Sure Abedi Pele and Dede are angry 😂

Jordan Ayew should be sidelined for sometime as he's not scored in over 40 games both club and country. I think we should give the younger ones the chance to play