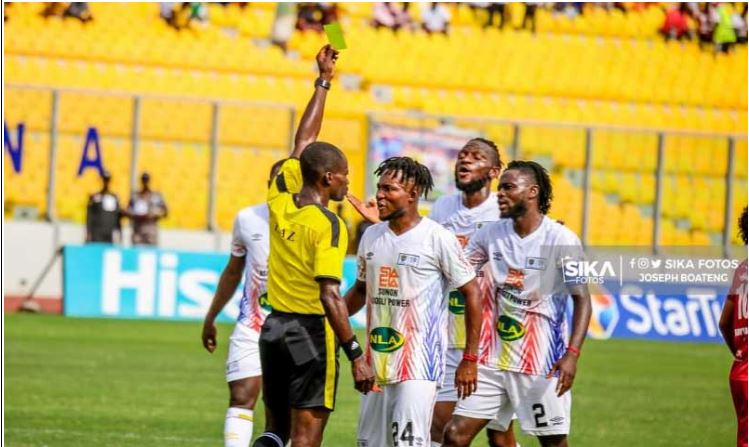 The Ghana FA’s Match Review Panel has suspended referee Kenny Padi for the rest of the season after the panel ruled that his decision to award a penalty to Asante Kotoko against Hearts of Oak in their Match Week 24 clash at the Baba Yara Stadium was erroneous.

In the said match, referee Padi pointed to the spot after he determined that Hearts of Oak’s Nurudeen Aziz had fouled Kotoko’s Fabio Gama in the penalty area. The resulting spot kick was put away by Franck Mbella and taht was how the match was settled.

Hearts of Oak officially filed a protest to the Ghana FA to state their displeasure at the penalty decision.

On Thursday, the Ghana FA’s Match Review Panel went over the encounter again and decided that referee Padi had committed an error in his judgement and the outcome of the match was changed by that decision and the video evidence available to the panel showed that the decision was a wrong one.

In its ruling, the panel said:

“If there was pushing as claimed by the referee, we did not see any movement of the arm from the back to forward.

Meaning no HAND MOVEMENT and no pulling movement from front to back. The attacker was already throwing himself down in a completely strange way.

If there was pulling or pushing as claimed by the referee, the attacker should have fallen on the face and not with his back as seen in the video. (FOOTBALL UNDERSTANDING)

The video also showed quite a number of inconsistencies in his decisions during his officiating of the match especially after the penalty incident. The referee lost concentration.

The Panel concluded that, per the video watched, and the referee’s defense is in contrast.

Per the video watched the Panel holds the view that the referee erred in awarding the penalty. This error changed the outcome of the match.

Therefore, the Referee Joseph Kenny Padi is suspended for the rest of the season. This includes all GFA organized matches.”