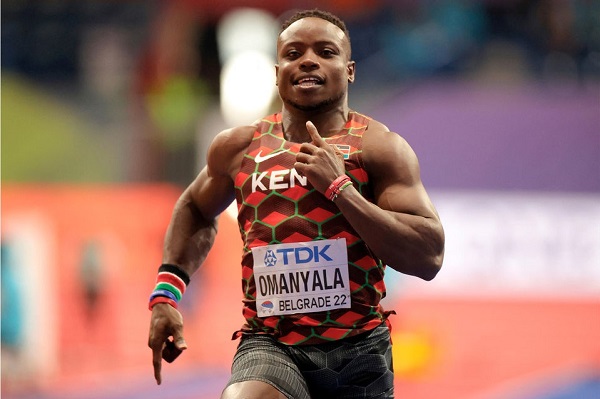 Kenya's Ferdinand Omanyala competes in the men's 60 metres heats during The World Athletics Indoor Championships 2022 at the Stark Arena, in Belgrade, on March 19, 2022. (Photo by Pedja MILOSAVLJEVIC / AFP)

Africa’s fastest man Ferdinand Omanyala faces a race against time for an American visa so he can compete at the World Athletics Championships.

Omanyala, who won the African 100m title last month, is due to race in the heats on Friday at the global event in Eugene, Oregon.

“Sad that I haven’t travelled to Oregon yet and 100m is in 2 days. Visa delays!!” the 26-year-old Kenyan sprinter posted on Instagram.

“I am still hopeful. If I make it to the starting line, it will be fireworks. I thrive on setbacks.”

Currently the third-quickest man in the world this season behind Americans Fred Kerley and Trayvon Bromell, Omanyala set the African 100m record of 9.77 seconds in September last year.

The World Championships begin on Friday and last until 24 July, and Athletics Kenya executive member Barnabas Korir says several other athletes have also been affected by visa delays.

“We are anxiously waiting for the US embassy to issue visas for a number of athletes, including Omanyala. Hopefully they will be able to fly out today,” Korir told AFP.