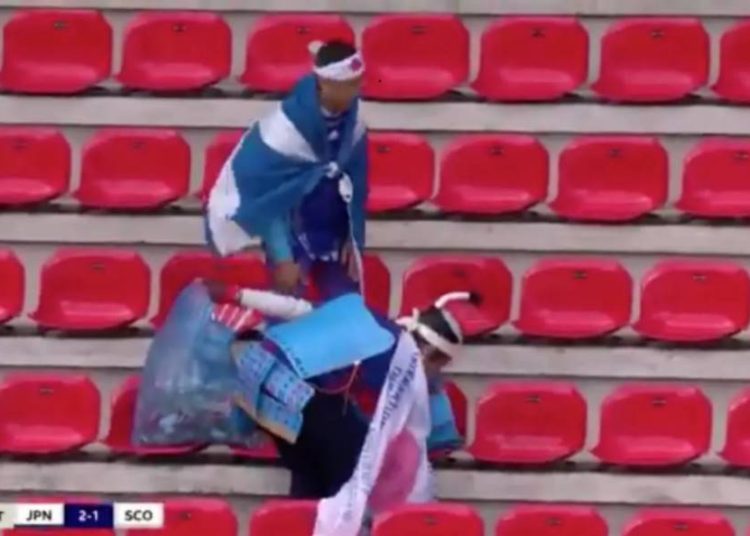 Japanese fans attending the 2022 World Cup in Qatar have earned plaudits for cleaning up their section of the stands after the opening ceremony.

The clean-up took place after hosts Qatar slumped to a 2-0 defeat at the hands of Ecuador at the Al Bayt Stadium.

In a video posted on social media, the followers of the Blue Samurai are shown making sure they left no mess in the stadium.

It has become something of a trademark of the Japanese at major tournaments, as they made headlines in 2018 most notably for cleaning up after their dramatic elimination in Russia at the hands of Belgium’s Red Devils.

In the video you can hear the following:

‘Why are you doing this?’

‘We are Japanese, and we do not leave rubbish behind us, and we respect the place.’

The supporters also picked up flags that had been thrown by the Qatari and Ecuadorian fans, saying the symbols “command respect.”

The video which can be seen below has racked up almost a million views at the time of writing and tournament hosts Qatar would hope that their example is emulated by various fans at the Mundial.

Japan are in Group E with Costa Rica, Germany, and Spain. They will kick off their World Cup campaign against the Germans on Wednesday, 23rd November at 1300 GMT.

The Japanese are incredible people. The cleaned the stadium after the #FIFAWorldCup opening game between Ecuador and Qatar. Respect!#JPN #QAT #ECU pic.twitter.com/c3hvJ7vJZm