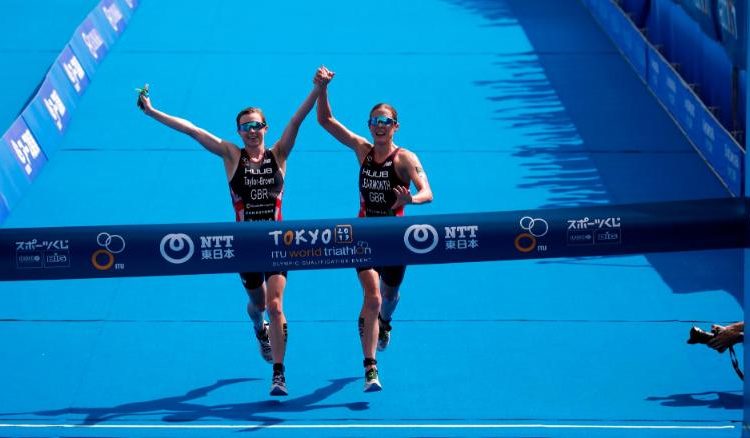 Not the way this pair would have wanted their race to end.

Two British triathletes Jess Learmonth and Georgia Taylor-Brown, were celebrating a great performance at the World Triathlon Olympic Qualification Event in Tokyo, where they were set to finish first and second.

Unable to contain their joy, the compatriots held hands and crossed the line together, well clear of the athlete in third, Bermuda’s Flora Duffy.

Although Learmonth was then declared the winner, the rules of the  International Triathlon Union’s competition state that “athletes who finish in a contrived tie situation, where no effort to separate their finish times has been made will be DSQ (disqualified).”

Hence, the two athletes were disqualified with Duffy being handed first place.

The two, however, do not miss out on a potential place at the Olympics as, fortunately for them, the running section was cut by half due to bad weather.

The decision sparked some outrage on social media as a number of people backed the British pair.

Others felt that the women’s action was unnecessary so the disqualification was justified.

I am genuinely upset for these champions. A telling off , a fine perhaps but dq ??? Olympic places lost and lives potentially changed?! Bollocks @Jess_Learmonth @georgiatb https://t.co/x1OBaXQXex

Dreadful that following competitors accepted the decision. They all should have refused. Either DQ us all or let it be either joint first or who came first in on the bike leg.

Who’s toe/nose/finger crossed the line first? That who should be announced the winner if there is the need! Terrible decision. But rules is rules! If someone needs a separate time, separate it by the finest of splits.

Mike Cavendish, British Triathlon National Performance Director said: It’s obviously disappointing to have Jess and Georgia disqualified but it’s a testament to the depth of our female squad that we still have another athlete on the podium.”

Two British triathletes were disqualified for crossing the line together in a test event for next year's Tokyo Olympics. https://t.co/EM70e9rW8g pic.twitter.com/wQDVanAroj