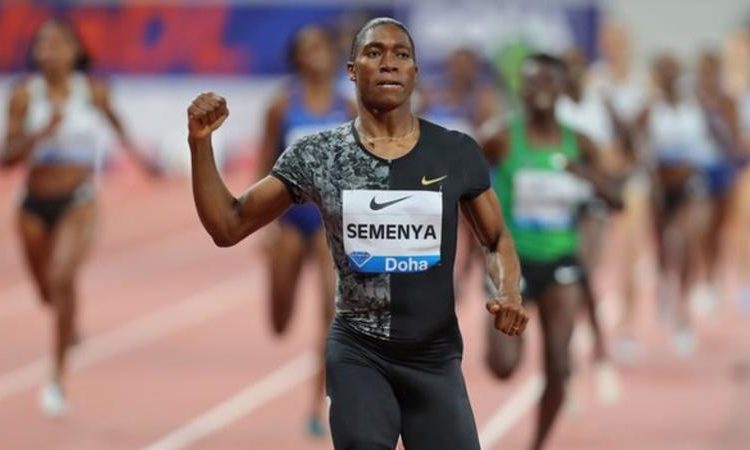 South Africa’s two-time Olympic 800m champion, Caster Semenya, has joined a women’s football club in his native country, as she appears to be preparing for life after athletics.

The 28-year-old is currently appealing against a decision by the Court of Arbitration for Sport which approved the IAAF’s introduction of a new testosterone limit for female athletes. The governing body introduced the rule change because it argues female athletes with differences of sexual development (DSD) – such as Semenya – have “a competitive advantage”.

Under the rule, all athletes with a difference in sex development should reduce their blood testosterone to a specific level for at least six months – and then maintain that for the rest of their athletic career – in order to compete in events from 400m to a mile. Semenya has remained “steadfast in her defiance” to do so and, as such, is unable to defend her 800m world title in Doha later this month without taking hormone-suppressing drugs. So the South African, has started training with Gauteng-based JVW FC with a view to making her debut next season as the transfer window is currently closed.

“I am grateful for this opportunity and I appreciate the love and support I already get from the team,” she told the club’s website. “I am looking forward to this new journey, and hopefully I can contribute as much as I can to the club.”

Club founder and South Africa captain Janine Van Wyk said: “I am absolutely honoured that out of all the other women’s clubs around the world, she has chosen JVW as the club where she would like to start showcasing her football skills.

“I welcomed her at her first training [session] with the team on Tuesday and was impressed to see that she definitely has all the fundamentals.”

Semenya is not the first athlete to transfer to football – 100m and 200m Olympic champion Usain Bolt did the same after retiring in 2017, joining Stromsgodset in Norway prior to signing for Australia’s Central Coast Mariners. However, it proved to be short stint in Gosford for the sprint icon; he left after only eight weeks at the club.

Semenya will not be registered for the 2019 SAFA Sasol League, the league in which JVW play, as the transfer window has shut for the current season. She will train with the team and target being ready to play for them during the 2020 campaign.