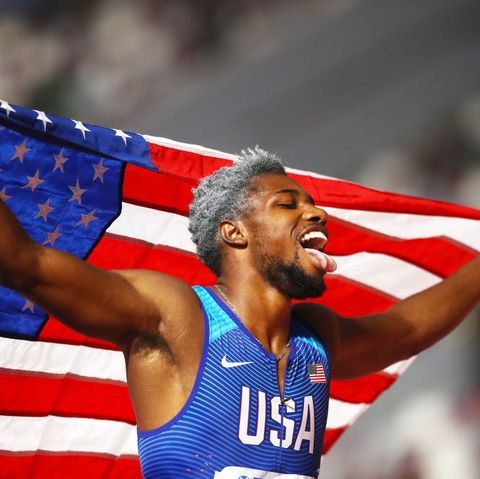 World 200m champion, Noah Lyles, is targeting a sprint double at the 2020 Olympic Games after winning his first world championship medal at the IAAF World Athletics Championships in Doha, Qatar.

The 22 year old, heavy favorite for the 200m title before the competition, had to work harder than expected to win the title in 21.83sec, a long way off Usain Bolt’s 19.19sec record Lyles was widely expected to attack in Doha.

Yet, the American was happy to win gold, his first of the competition after missing London 2017 through injury.

“I hadn’t even realized I won, to be honest. I’m not going to lie” Lyles said with a huge smile. It’s like something you’ve imagined so many times in your head that once you actually achieve it it’s like, ‘I don’t believe I did this’. But it does feel really good to know that I’m at the end of the season and we came out with the ultimate victory which is the gold medal.”

In August, Lyles came from behind to beat 2017 world champion Justin Gatlin in the 100m at a Diamond League meeting, and that has certainly left Lyles no less confident he can do the double in Tokyo.

“I’m definitely going after the 1-2 double I know everyone is asking that, don’t worry,” he assured. “Tokyo is it. This time we got the gold. We got the gold in the 200, and now we are going to get that double gold.”

Lyles will return to the tracks on Friday as part of the USA’s men’s 4x100m relay team hoping to clinch another gold medal for himself and his country.