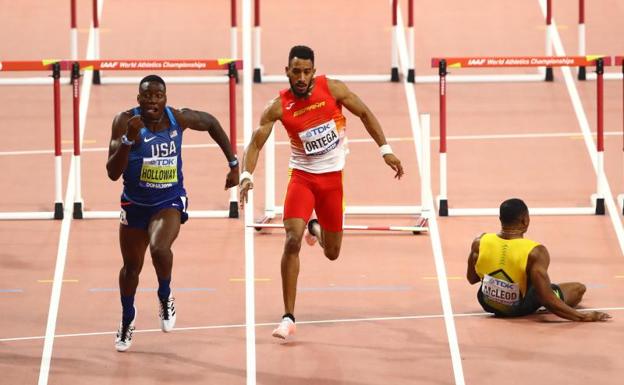 Spain’s Orlando Ortega has been awarded a bronze medal in the men’s 110m hurdles after Spain won a successful appeal over the Spaniard’s obstruction in the 110m hurdles final.

Jamaican Omar McLeod’s fell in the closing stages of Wednesday night’s race, which appeared to cost Ortega a medal place.

Spain filed an appeal before the IAAF’s jury asking for either the race be re-run or Ortega be awarded a bronze medal as he was third at the time of the incident but his progress was clearly impeded, making it impossible for him to maintain the medal position.

The Jury of Appeal reconsidered the case and ruled that Omar McLeod’s fall indeed impeded the Spanish Athlete, and accepted the Appeal and subsequently directed that Spanish athlete Ortega be awarded a bronze medal.

This means Ortega will share the medal with France’s Pascal Martinot-Lagarde who finished in 3rd place in the race that was won by USA’s Grant Holloway.

Favourite to defend his title, Jamaican McLeod came out of the starting blocks fast but his race quickly turned sour as he knocked down hurdles and tumbled to the track before reaching the finish line.

McLeod’s problems seemed to upset Diamond League champion Orlando Ortega in the next lane and he finished fifth in 13.30 seconds.

Team Spain requested that, under Rule 163.2 a), either the race be re-held, or the athlete be allowed to compete alone.

If the above request is not accepted, Team Spain request that, as a fair sporting gesture, ORTEGA be awarded the medal corresponding to his position at the time of the obstruction..

What does the IAAF rule say?

2. If an athlete is jostled or obstructed during an event so as to impede

(a) if the jostling or obstruction is considered unintentional or is caused otherwise than by an athlete, the Referee may, if he is of the opinion that an athlete (or his team) was seriously affected, in accordance with Rule 125.7 or Rule 146.4, order that the race (for one, some or all of the athletes) be re-held or allow the affected athlete (or team) to compete in a subsequent round of the event;