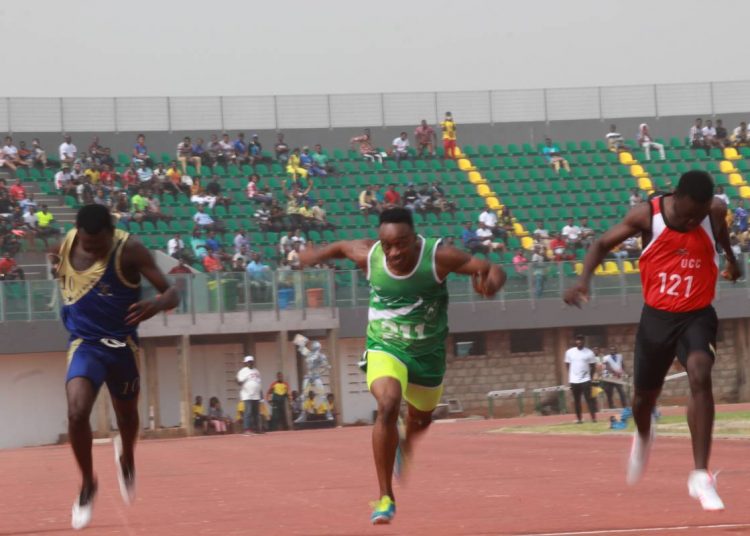 The 26th edition of the Ghana Universities Sports Association (GUSA) Games has been characterized by a great exhibition of sportsmanship, a test of character and strength.

The just-ended 2020 GUSA Games saw some records broken by athletes in the athletics sporting discipline.

The likes of Rose Yeboah, Ali Yahaya, Ebenezer Gyimah, Yamoah Cadmond, Grace Obour, and William Amponsah can be mentioned as athletes who reached new feats in the GUSA Games.

Here are the top five records that were broken in the GUSA Games:

Rose Yeboah of the University of Cape Coast jumped highest in the High Jump event during the 2020 GUSA Games.

The 19-year-old from the University of Cape Coast jumped a height of 1.85M in the competition to break the record set by Abigail Kwarteng in 2016 who recorded 1.70M.

Rose has now improved on her personal best which stood at 1.84M; a feat she reached in the African Games in Rabat last year.

The African Games bronze medalist beat her fiercest rival, Rafiatu Nuhu, to topple her record which stood at 54.79 seconds in 2019.

She made a new time of 53.076 seconds to edge past University for Development Studies (UDS) pair of Rafiatu Nuhu and Aduntira Grace.

The 18-year-old has a personal best time of 51.86 seconds, feet she reached in Rabat, Morocco in the African Games to win the bronze medal for Ghana.

The University of Education, Winneba (UEW) student, William Amponsah holds the records for the 5,000 and 10,000 metres races in the GUSA Games.

The 21-year-old first smashed the 5,000 metres record by clocking a time of fourteen minutes 19 seconds.

William broke Malik Yakubu’s record by two minutes as he runs around the track to glory in the games.

Ali Yahaya, a student of the University of Ghana shattered a 25-year-old record set in the Pole Vault event at the GUSA Games.

In both the male and female categories of the 4×100 metre races, the University for Development Studies (UDS) showed supremacy to clinch gold and set new records.

In the female division, the quartet from UDS clocked a time of 45.946 seconds to beat UCC, UG KNUST and UEW.

Wallace Aflammah, Sarfo Ansah, Derrick Sarkodie and Barnabas Aggeh were too strong for their opponents in the 4×100 metres.

UDS won the race in a time of 40.27 seconds with the University of Ghana and UCC coming second and third respectively.