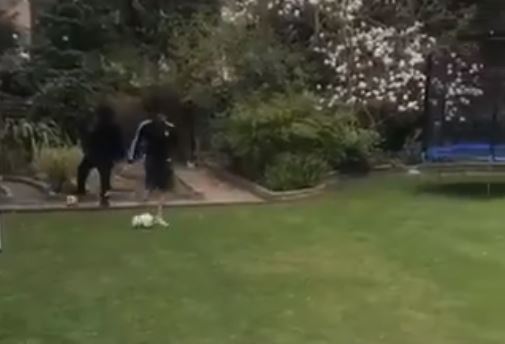 While the world is battling with the Coronavirus pandemic, some footballers are trying as much as they can to keep themselves active and also entertain their global audiences.

A majority of the world sporting professionals have been taking part in the #StayAtHomeChallenge where they juggle rolls of toilet papers instead of footballs at home.

Black Stars and Crystal Palace forward, Jordan Ayew, has taken the challenge to another level as he struck a ball from about 20 yards into a mini basketball hoop in his backyard.

The striker posted the video with the caption “#StayHomeSaveLives”.

The look and lob is nothing but class and an exhibition of Ayew’s shooting skills.

Earlier, the striker joined his brothers, Andre and Rahim in the #StayAtHomeChallenege.

A host of players have taken part in the challenge, including, Paul Pogba and Lionel Messi have already shared videos of themselves taking on the challenge.

Players in the Ghana Premier League were not to be left out as they also showcased their skills on camera.

Even Black Stars boss C.K Akonnor had a go.

Some of the most popular entries featured, not footballers, but sports journalists who tried to walk their talk.