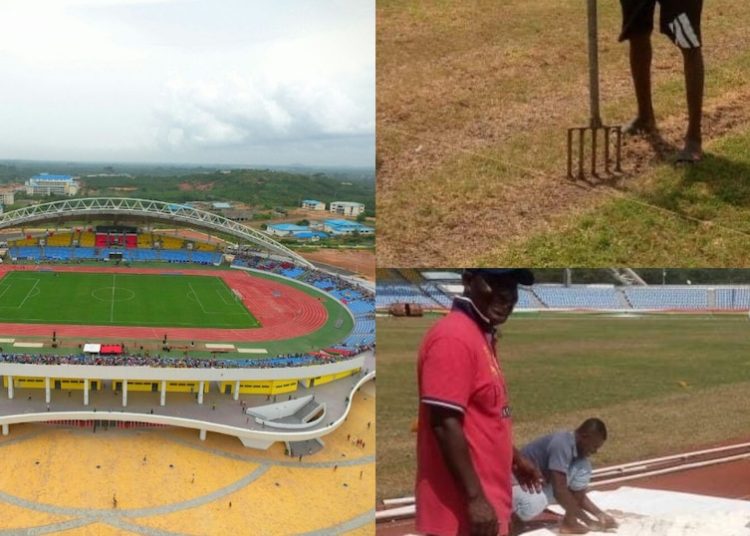 Ghana risk having the first leg of their 2022 World Cup qualifying play-off match against the Super Eagles of Nigeria taken away from the Cape Coast Stadium after the Nigerians protested to the Confederation of African Football over the state of the pitch.

The Cape Coast Stadium had been billed to host the game on 25th March, 2022 but the use of the facility for Ghana’s 65th Independence Day celebration on 6th March, has degraded the pitch, with the NSA racing against time to have it ready by the match day.

But Nigeria do not trust that the pitch could be fixed in that short amount of time, and have petitioned CAF and FIFA to have the venue changed.

Ironically, pictures shared by the NSA to showcase progress of work on the pitch, were used by the Nigeria Football Federation in their protest.

Morocco and Benin have been touted as possible countries to host the first leg encounter.

Meanwhile, a CAF official was pictured at the Baba Yara Stadium on Sunday, inspecting the venue, raising hopes that the venue could step in to replace Cape Coast in case the latter is not approved.

Meanwhile, the said official is expected to conduct his last inspection of the Cape Coast Stadium on Monday 14th March, 2022, and his recommendations could determine where the game is played as Ghana awaits anxiously.

Nigeria has already named a strong squad for the game while Ghana have decided against an early announcement of squad for the crucial tie.