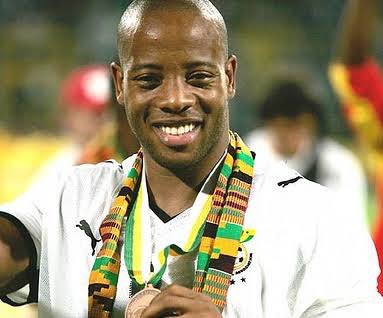 Tributes have been pouring in for ex-Ghana international, Junior Manuel Agogo, who passed away in a London hospital earlier today.

The former Nottingham Forest and Zamalek striker had been battling stroke since 2015 until his demise on Thursday morning.

Former teammate and General captain of the Black Stars, Asamoah Gyan, took to twitter to post two images of himself and Agogo and said he was “gutted” by the news.

Just heard the news that one of my first clients ever Junior Agogo has passed away. Still can't believe it. One of my proudest moments in football is seeing him smash the AFCON in Ghana 😢😢😢 #rip #ghana

The Ministry of Youth and Sports said Agogo “will be fondly remembered for the memories”.

You epitomized a phrase in our national anthem 'Bold to defend' and as it were, the privilege and the pride to represent your country with the @ghanafaofficial Black Stars.
Indeed, you will be fondly remembered for the memories
RIP Junior Agogo! pic.twitter.com/d6KN5QXbyS

The Ghana Football Association is saddened by news of the sudden demise of ex-Ghana star Junior Agogo. On behalf of the Ghanaian football fraternity, we extend our sincere condolences to the family of our Black Star, Junior Agogo. May his soul Rest In Peace pic.twitter.com/cRgskOyuC3

Thanks for the memories.

FIFA sent out thoughts too.

Our thoughts are with the friends and family of former @ghanafaofficial striker Junior Agogo, who has passed away aged 40. pic.twitter.com/2AwtisefX8

Junior Agogo from the heartbreak💔of watching him on BBC's Speechless to today's sad news at 40.

What a journey! full of unforgettable memories in the colours of Barnet, Bristol Rovers and Nottingham Forest.

The brightest Black Star at AFCON 2008 on home soil.

His former clubs joined in with praises for their former forward, with Nottingham Forest tweeting they were “saddened” by the news and Sheffield Wednesday sending thoughts to Agogo’s family.

Sheffield Wednesday are saddened to learn of the passing of our former player Junior Agogo.

Our thoughts are with Junior's family and friends at this very difficult time. RIP pic.twitter.com/4AHHSuPw8M